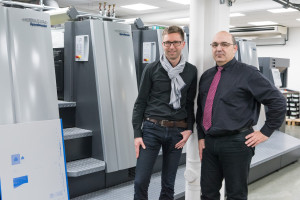 “We’re now able to print jobs that we couldn’t before. Everything has been exactly as Heidelberg promised”, says Christian Rump from Blömeke in Herne in summarizing his experiences with the new Speedmaster XL 75-5 LE UV, which the media company has been using for almost one year to the day. Managing directors and brothers Christian and Klaus-Georg Rump were looking for a replacement for their two older presses, and made increasing the profitability of their press arm and achieving a higher margin their top priority. “We actually see ourselves as a media service provider rather than a print shop”, explains Christian Rump. “50 per cent of our turnover comes from printing, and the other half from services like design, warehousing, and global logistics services,” confirms Thomas Kuhnert, Head of Media Design and Sales. The company has been offering web-to-print shops as private areas for its customers for the last 15 years. The majority of these are well-known industrial companies headquartered in Germany with international subsidiaries. Blömeke specializes in optimizing processes in printing, service, and international logistics, and has a loyal customer base.

As part of the tenderi 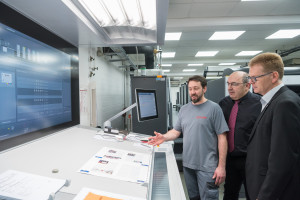 ng process, Blömeke invited the experts from Heidelberger Druckmaschinen AG (Heidelberg) into the company. Together, they analyzed all the relevant data in an investment plan as a service. What is a typical job like, and what do Blömeke’s customers expect? It quickly became clear that replacing the old presses from another supplier with a highly automated five-colour Speedmaster XL 75 in three-shift use would offer the greatest efficiency. Up to then, the company had been running two presses in two shifts. Heidelberg recommended its innovative LE UV drying technology (LE = Low Energy) as the best solution for achieving the required high quality standards given the fast delivery times and the predominantly short runs of 2,000 sheets per job on average. This would also mean no more protecting jobs with dispersion coating, particularly for short runs, as a requirement for prompt and quick finishing with no scratches. 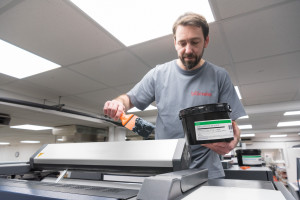 Heidelberg won the contract, and Blömeke is now using the first Speedmaster XL 75-5 LE UV in Germany for its printing needs. At the same time, the company agreed to field test the new software versions for all of its machines. Together with the new Prinect Press Center XL 2, the Prinect Inpress Control 2 inline colour measurement system, the fully automatic AutoPlate Pro plate changer, and the Wallscreen XL, Blömeke is now kitted out with the latest drupa generation. “Our makeready times have halved, we’re using 40 per cent less energy, and saving over 50 metric tons of paper each year thanks to faster inking up and less paper waste. Our jobs have become more profitable without us having to increase our prices”, reports a satisfied Christian Rump. “This is all the more important since we have around 40 makeready processes each day and every third job needs different paper.” The press has been running around the clock since it was commissioned. “We have 98 per cent availability, and the SystemService36plus contract gives us peace of mind”, explains Christian Rump. The “all-round carefree package” is complemented by Saphira consumables including LE UV process and spot colors, washing fluids, rubber blankets, and printing aids that are precisely matched to the press.

“An investment like this requires careful preparation, and we received top notch support from Heidelberg here too”, explains Christian Rump. “Together we printed an image brochure with our motifs in the Print Media Center in Wiesloch-Walldorf, which demonstrated which materials and which finishing options with matt or gloss sport are possible with the Speedmaster XL 75-5 LE UV. We can now print on normal paper, natural paper, plastic, and foils. For example, the photo book “Schusswinkel” by photographer Tim Kramer for the football club VfL Bochum was printed on natural paper in a quality that would not have been considered possible previously. The LE UV technology is particularly beneficial for natural paper, since no powder application or coating is required and the natural look is retained with a high printing quality. “We’ve been able to inspire our existing customers and win new customers. Furthermore we are now offering faster and completely reproducible delivery. We’ve also been able to reduce our already low complaint rate even further,” notes Christian Rump.

Blömeke has ambitious plans for 2017. “We’ve stepped up our sales activi 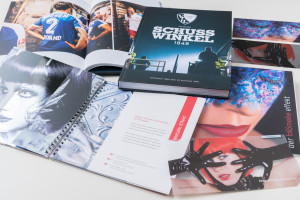 ties in order to be able to actively approach new customers and provide our existing customers with additional services. The new materials allow us to offer special applications that are more economical than traditional print jobs. We’re also planning to establish a public web-to-print shop for customers,” adds Thomas Kuhnert. Another project that has also been implemented in partnership with Heidelberg is the integration of prepress and the MIS system, which are from other suppliers, via the CIP4-JDF/PPF interface of the Prinect Pressroom Manager. This permitted implementation of the Push to Stop concept and the smart print shop. An exciting future lies ahead for the media company, which was established as a stationery shop in 1899 and today has 40 employees.