By AdminAugust 3, 2015No Comments2 Mins Read 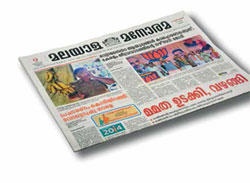 Malayala Manorama, one of India’s leading newspaper publishers, is modernizing and expanding its printing capacity with new generation presses and mailrooms. Five identical direct printing lines from Muller Martini will ensure a speedy production process from the printing press to the ramp at its four plants in Kozhikode, Kottayam,Kollam and Pathanamthitta (all located in the state of Kerala).

To enhance its printing capacity, the company, which was established 126 years ago, is installing five double width Diamond Spirit SA newspaper rotary presses from Mitsubishi with a maximum production speed of 75,000 copies per hour, and printing capacity of 40 broadsheet pages, at its four printing plants at Kozhikode, Kottayam,Kollam and Pathanamthitta in the state of Kerala in south India.

“Printed newspapers continue to be the main source of our company’s revenue and that will remain the case for the foreseeable future,” says Chief Editor Mammen Mathew, explaining the major investment.

In order to convey the newspapers smoothly from the printing press to the ramp, Malayala Manorama opted for a total of five identical direct printing lines from Muller Martini. The centerpieces of the state-of-the-art mailroom systems are the latest generation NewsGrip conveyor chains, each with a receiving and delivery station.

In addition, the five lines, which will come onstream between December 2014 and December 2015, each include two NewsStack compensating stackers, Solema belts, a Sitma bundle film wrapper with cross strapping, manual application of pre-printed top sheets and a control system for bundle production.

Mr. Mathew explains that Malayala Manorama opted for the solution from Muller Martini, due to financial and technical reasons. “We calculated the total cost of ownership of all the proposals we received and Muller Martini stood first. The maximum speed of 90,000 cycles per hour for the mailroom exceeds that of our new printing press by 15,000 copies. That means the mailroom systems are not producing at their limit, which lowers maintenance costs and increases their economic lifetime.”

In addition to the good aftersales support by Muller Martini India, the feedback given by another Indian Muller Martini customer also spoke well of the new solution, Mr. Mathew states: “I enquired at ‘The Hindu’ about their experiences with the Muller Martini systems there and heard only positive reviews from them.”