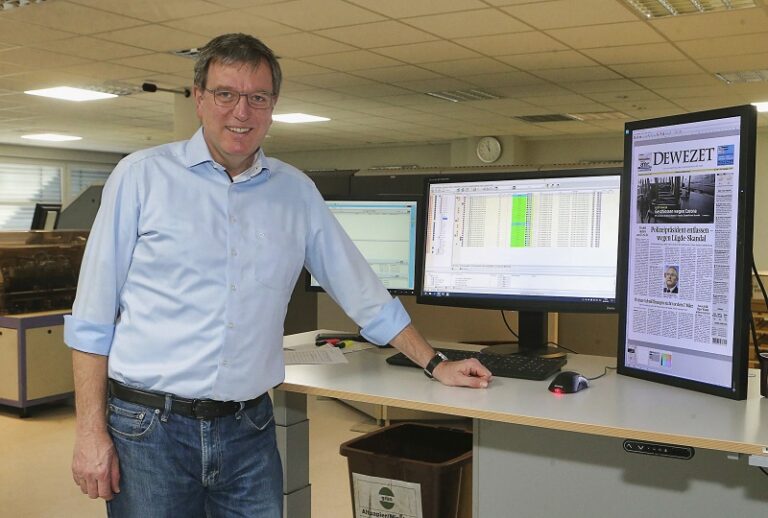 Faced with dwindling circulations and commercial constraints, newspaper printers are searching for ways to make their processes more efficient and more economical. Deister- und Weserzeitung (Dewezet) of Hamelin (Lower Saxony, Germany) is no exception. Every night, the company’s printing center produces around 60,000 newspaper copies. They are printed on a Geoman newspaper web press along with some 300,000 weekend freesheets, various newspaper pre-prints and a series of more minor publications. Dewezet needs about 600 plates per day in single format (321 x 512 mm) for the nightly production of daily newspapers. And if the days, too, are filled with lengthy production runs, that volume increases to more than 1000 plates per day. All in all, plate consumption adds up to something like 260,000 per year – equivalent to over 40,000 square meters.

Paradigm shift – from violet to thermal & process free with Kodak

Having used violet CTP exposure for fifteen years to make violet plates with wet chemistry processing, the company changed course at the end of 2018. Dewezet decided in favour of a newspaper CTP solution from Kodak involving thermal imaging of KODAK SONORA Process Free Plates. The partnership with Kodak had already begun a few years previously when Dewezet switched to the KODAK LIBRA VP Digital Plate for violet CTP.

“Both of our violet platesetters would have kept going reliably for another ten years, but we wanted to eliminate the plate processing step – naturally without any reduction in print quality,” explains Carsten Wilkesmann, Operations Manager, who has been at Dewezet since 2001. “It seemed as if our two plate processors were responsible for 80 percent of the manual work in our platemaking department and they were a permanent source of potential problems. If anything went wrong, the chances were that the plate processors would be the culprit. We were forced to spend far too much time on maintenance, repairs and cleaning. Added to that, the leaner process with SONORA Plates simultaneously paves the way for future cost savings.”

Wilkesmann admits that his people were rather skeptical at first regarding the ‘develop-on-press’ principle. “However, in day-to-day use, our printers were pleasantly surprised – on the one hand, by the speed at which the plates run clean as well as by the fountain solution control and on the other, by the fact that there is absolutely no contamination of this solution. We can produce using less fountain solution and the whole process is now more stable,” he reports. “What’s more, a direct comparison showed that the SONORA Plate gave us a better-quality printed image than the old violet plate. Newspaper printing quality is an important aspect for Dewezet, as reflected by the company’s successful membership of the WAN-IFRA International Newspaper Color Quality Club for the past several years and its admission to the exclusive Elite Star Club.

The more efficient and more sustainable way to press-ready plates

In addition to the TRENDSETTER NEWS Platesetter with a Single Cassette Unit (SCU), Dewezet also installed a KODAK GENERATION NEWS Platesetter. After being imaged on the CTP systems, the SONORA Plates are supplied by a conveyor belt to the plate punch in the control center of the newspaper press. In other words, the printers receive the plates automatically, directly at their place of work.

The end of conventional plate processing not only resulted in a much smaller footprint for the CTP equipment; the carbon footprint of the platemaking process was also reduced. And there are almost 6000 liters per year less of used chemicals to dispose of. And that’s not all: process free eliminates process variability because there is no gradual depletion of chemistry to contend with.

As one of only a few newspaper printers worldwide, Dewezet was invited to test Kodak’s newest generation of process free plates, the SONORA XTRA Plate, from an early stage, so that its entire production could be migrated from the SONORA X to the new type in summer 2020. Out of the numerous advantages of the new SONORA XTRA Process Free Plate, two are particularly relevant for Dewezet, as Carsten Wilkesmann confirms: “Apart from their increased robustness and enhanced scratch resistance, the main benefit for us lies in the dramatically improved contrast of the plate coating. The plate punches we employ no longer have to be equipped with special, and very expensive, register cameras to enhance the image contrast. And the optimized contrast makes it easier for our printers to carry out a visual inspection of the plates and sort them prior to positioning them on the plate cylinder.”

Both on the standard 45 g/m2 newsprint and on the matte 60 g/m2 LWC paper that is occasionally chosen, the newspaper printer achieves consistently high print quality. Since Dewezet’s longest run length is 100,000 impressions, the SONORA XTRA Plate is easily within its limits, being capable of four times that figure for newspaper offset.

“We wouldn’t hesitate to do it again,” Wilkesmann comments recalling the transition to Kodak CTP and process free technology. “It’s a much simpler process that means far less stress and fewer problems, especially when it comes to prepress. The SONORA Plates work perfectly in production. The upshot is that our people are free to concentrate on more important things during the production process.”