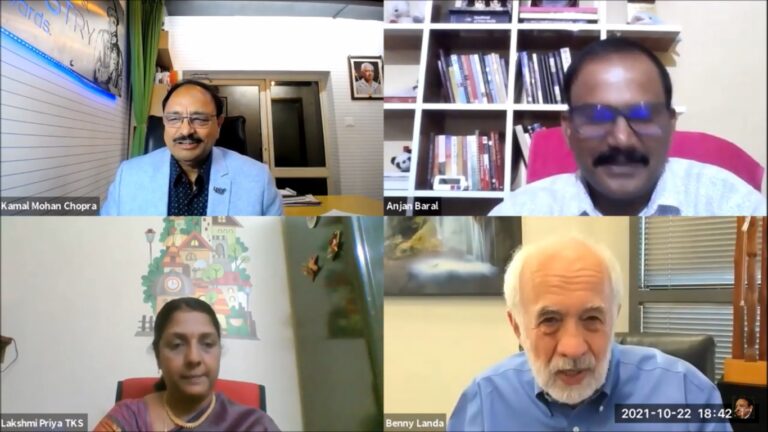 In this digital era, with the pandemic affecting everyone, globally, one of the success mantras is UNITED WE STAND DIVIDED WE FALL the phrase that can be traced back to some 2600 years and is continuously being quoted by numerous visionaries and leaders from time to time. This is true for the printer community too. Therefore, the Offset Printers Association (OPA) came up with the idea of celebrating the Printers Unity Day every year, taking in consideration the present situation it was decided to celebrate the day in an online mode this time.

An event like ‘Printers Unity Day’ holds special significance especially in a country as diverse as India which has the highest number of printing companies in the world (250,000). The aim of the event was to unite the printers belonging to different categories, regions, size and those working with different technologies. About the purpose and necessity of the event, the Offset Printers Association in an official statement said, “The Printers Unity Day will provide an opportunity to re-affirm the inherent strength and resilience of the printers of the country to withstand the actual and potential threats to the unity, networking and strength of the printing industry.”

Every year on this day, various programmes will be organized by OPA in collaboration with printing institutions, other printers and allied associations across the country to spread knowledge about printing technology and the contributions of Prof. Chopra. Printers will also wear the uniquely designed badge ‘PROUD TO BE A PRINTER’ this day to show unity, solidarity and their strength.

Now that we know the objective of the Printers Unity Day, the next question that arises is about choice of the date i.e. 22 October. Well, for this, let us recall that Mr.Kamal Mohan Chopra, as we all know has been instrumental in numerous activities over a decade that has brought the printing fraternity across the world together: ‘Print Yatra’, ‘InterPrint Expo India’, ‘Print Chetna’, ‘Proud to be a Printer’ slogan, ‘Print Media Ashram’, ‘Print Olympiad’, ‘Viren Chhabra Print Leadership Award’, Formation of 53 new Printers’ Associations, organising More than 60 webinars, an exclusive YouTube Channel – Ocean of Knowledge for the Printers, etc. are a few of his brilliant initiatives. What other occasion can be most apt than to dedicate the birthday of Prof Kamal Mohan Chopra i.e., 22nd October every year as PRINTERS EKTA DIWAS – (Printers Unity Day) on an International Scale. Taking a cue, Offset Printers’ Association decided to celebrate his birthday by way of observing ‘Printers Unity Day’ on 22nd October.

Accordingly this year, taking in consideration the present situation, the day was celebrated on virtual platform at 7:00 p.m. on 22nd October, 2021. The Event began with brief networking questions by Prof.Anjan Kumar Baral, who introduced and invited the moderator, Prof TKS Lakshmi Priya for leading the celebrations. After brief introduction about the purpose of the grand day and the significance of the date, she invited Mr. Parveen Aggarwal, President OPA and the person behind the event for his welcome address.

Welcoming the galaxy of leading print personalities of the world, Mr. Parveen Aggarwal said, “Today is the greatest day for me to welcome the Global Print Leaders, who are here to bless our novel project to observe ‘Printers Unity Day’ every year on the birthday of yet another equally important print personality, Prof. Kamal Mohan Chopra. He took it as his mission to Unite Printers of India (and even world) besides his many other equally important contributions to printing fraternity.” Mentioning about Mr. Benny Landa he said, “While we’re excited to have you all here tonight, we’d especially like to say welcome to the Inventor of Digital Printing, Benny Landa from Israel. He founded Indigo Digital Press in 1977 and The Landa Group in 2003. In the print production industry, Landa has been called the “FATHER OF COMMERCIAL DIGITAL PRINTING.”It will be our Fortuity to listen his words of wisdom, maybe he will be addressing the Indian printers for the first time ever.”

Speaking on the occasion, Mr. P.Chander, President AIFMP emphasised on unity and said it cannot be achieved in a day. “I know Prof. Kamal Chopra is working for it since more than 20 years. He has travelled length and breadth of the country for the purpose and with his vision created more than 53 new printers associations. The idea of observing 22nd October as ‘Printers Unity Day’ is wonderful and I wish all people-in-print may follow the same,” he said.

Dr Lakshmi Priya then narrated that the idea of celebrating Printers Unity Day came to the mind of Mr. Kanwardeep Sharma from Kurukshetra University. Kanwardeep said that he had been following Mr.Kamal’s activities and had always felt that such persons must be honoured and made known to the entire world. One way, he felt was to celebrate the birthday every year.

It is worth mentioning here that two books are written on the life sketch of Prof. Kamal Mohan Chopra. One is ‘Imprint of a Printer’ by Mr. P P S Gill, the veteran journalist and former state information commissioner Punjab. Mr. Gill has worked with The Tribune, has been the Chief of Bureau, Punjab and is the author of two other books as well. Another book ‘Life in Print’ is penned by Prof (DR) Anjan Kumar Baral. Speaking on the occasion Dr.Baral said, “My book is a small and sincere attempt to showcase a printer’s life – a small town boy could achieve so much while serving the cause of printing industry. Due to his efforts today, printing technology is included as a subject at school level, across the country.”

Ms.Beatrice Klose, Secretary General, World Print & Communication Forum, Brussels-Belgium and Intergraf of the European Federation for Printers, said that Kamal is known by printers world over and his role as President World Print Forum is commendable. It is notable to mention that Ms.Beatrice had rescheduled her travel plans and ensured that she was present at the meet, for the sake of the hero of the day – Mr.Kamal.

The next speaker was Mr. Ahmad Mughir Nurhani, President Indonesia Print Media Association, who recalled the first meeting with Mr.Kamal and the successive involvement in Print Olympiad etc.

Mr. Peter Deckker, President Sri Lanka Association of Printers, appreciated the idea of celebrating the Printers Unity day, a needy attitude that needs to be nurtured across the world.

From South Africa, Mr. Abdool Majid Mahomed, Chief Executive Officer, Federation of Printing Packaging Signage and Visual Communication, Printing South Africa, joined the meet live, although he too had expressed inconvenience and had shared a video message. He mentioned that Mr.Kamal has dedicated many years for the sake of printers and is the recipient of many awards, yet a humble person.

The next speaker was Mr.Vijay Kumar Chopra of Punjab Kesari and the Mentor of Kamal Chopra. He said he was happy to see the progress and growth of Kamal and is proud about Kamal’s contributions to the Printing community.

The next speaker was the International famed Printer, Scientist, Invertor, and Entrepreneur – Mr.Benny Landa. He founded Indigo Digital Press in 1977 and the Landa Group in 2003. In the print production industry, Landa has been called the “Father of Commercial Digital Printing.” Speaking on the occasion he said, “Kamal is a visionary who is capable of making a vision a reality especially for training and education.”

The next speaker was the representative of Nepal Printers Association. He expressed his immense happiness in taking part in this meet. He recalled Kamal’s connection with Nepal Printers association and said that Kamal is an international unity promoter.

In his message for the event Mr. Pranav Parikh, TechNova said, Kamalji’s selfless commitment and contributions to the industry are exemplary. He has worked tirelessly to uplift the educational and professional standards in the industry. Through his widespread global contacts, he has created a healthy network for international cooperation and idea-exchange. My sincere congratulations to him on his birthday and best wishes for continued success in his mission to uplift the standards of our industry.

Ms. Sabine Geldermann, DRUPA, Dussledorf, shared a video message in which she mentioned that Kamal’s attitude to bring all printers together is a trait that every country must take up.

The next set of speakers was from the academia: Ms.GelisaGua, from BIGC, China. Text message from Mr. Tarekeswar Prasad, Kamal’s teacher and former Principal at NRIPT, mentioned – “You’ve contributed a lot to printing education and industry, and have made indelible footprint at international level.” There were also video messages from Mr.  B.N.Mathur, former Principal NRIPT, Allahabad and Prof Madhura Mahajan, PVG Pune.

The session concluded with an emotional thank you message from Kamal Chopra. He said, “Let’s be together to help each other, to show that we are really ‘Proud Printers’ try to hold hands rather pulling legs, jointly we can succeed and conquer any challenge.”

Dr. TKS Lakshmi Priya, PhD in Computer Science has developed deep love for the printing industry and heads the Department of Printing Technology at Avinashilingam Institute for Women, Coimbatore. She has over 30 National and International publications to her credit. Dr Lakshmi Priya has been grooming the women students to become efficient employees, successful entrepreneurs and responsible citizens.  She strongly believes in the need for a strong bond between the Academia, Industry and the Government, to foster the future generation of our nation.