Your print-work-floor – How productive is it? 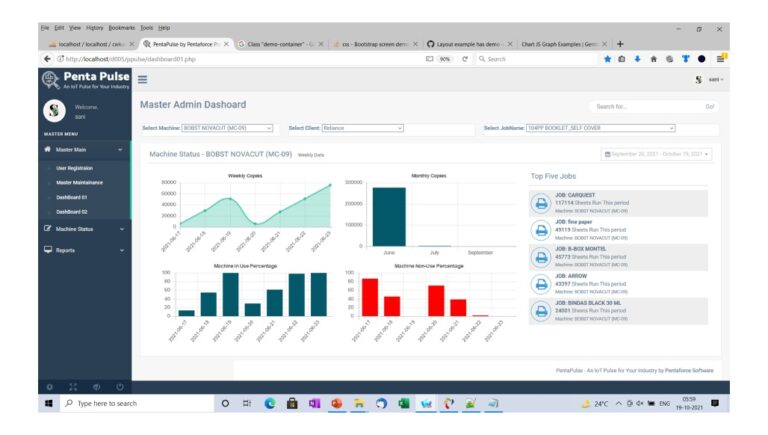 Exploring capabilities of an Overall Equipment Effectiveness (OEE) product which provides a valuable independent measure of how well a piece of equipment performs over time.

Understanding where the equipment is currently, versus where it can be, is critical to improving overall productivity. There are many steps that can be completed to achieve optimal equipment performance. Many of these changes are cultural and need to be embraced by management and recognized by all employees in any company. To fully optimize our equipment and obtain the best OEE, a maintenance program should be the cornerstone of facility management. Equipment failure and downtime can greatly reduce OEE and lead to missed production deadlines and increased costs. The importance of a Total Productive Maintenance (TPM) program that identifies and fixes issues before they occur is critical to production and can lead to a significant reduction in repair costs.

While speaking to Sachin Kala of Unico Tech Solution LLP (UTS), we came to know about a survey he took in India, in which it was surprisingly found that the average productivity of presses across India was less than 50%. He surveyed around 25 presses, a few of those were top presses of the country and also ‘well managed’. UTS is based out of Noida in the state of Uttar Pradesh and has recently venturing into this segment of the industry. Sachin is a part of the hugely successful company Ample which deals in providing Chinese machines for the Indian printing, packaging and corrugation industry with over 500 machine-installation milestone reached late last year.

The survey by Sachin Kala though revealed surprising performance data, on further research it was found that the global average too matched the Indian average. Speaking of press productivity, while speaking with a leading printer from north India, we were informed that he was ‘doing pretty good and was happy’ about their performance. He was quite upbeat about his unit’s productivity and performance (even when put against the performance and speed data assured by the manufacturer) achieved during actual operations. Now, what intrigued us was to check the printer’s productivity data against the parameters of a hybrid solution – the software-hardware based evaluator by Sachin.

Sachin installed his system for a week at the chosen printer. We thought it was about finding the present actual productivity. But, Sachin explains, “It is more than ‘live-productivity’. What the management system is capable of is – it can be transmitted to any Smartphone or screen of your choice; it can be any location of customer’s choice; it can be for multiple machines in the unit whether they are automatic or manual; it can find the reasons for the lack of productivity; and finally find how and what could be done to improve upon them.”

What UTS does is pretty simple – they start by conducting an online demo of CountWONDER Hybrid Solution for interested printers. Then, if the printer requires, a demo at their premises is arranged for a couple of days. During this time the CountWONDER generates reports for the management to see the actual productivity. CountWONDER is a Wifi based solution and requires no wiring etc. on the shop floor, which means it does not disturb the daily production or any other schedules of a printer. It can be called an Overall Equipment Effectiveness (OEE) product which provides a valuable independent measure of how well a piece of equipment performs over time.

The demo system at the chosen printer brought surprising results. After three-days of the installation, the UTS system found that the unit’s productivity was less than 23%. It meant that over 3 quarters of the time was being wasted. The areas of waste could be either a few or all of these – delayed start and early stop, line clearance, makeready, power failure, breakdowns and many more which when identified could be used to increase productivity. “The demo reports were even shocking for the printer. In fact he postponed his current investment decision and instead concluded to focus on address his productivity issues and resolve them first. He found it a waste to keep investing in new equipment that wouldn’t be giving their 100% anyway based on current standards,” shares Sachin.

For us, it was a big decision shift by a printer enabled by a pert evaluation by CountWONDER by UTS. “This is the capability of CountWONDER, which can spell wonders for any press big or small,” beams Sachin.

UTS will be shortly offering CountWONDER on a cloud based subscription model as well which would be a great help for smaller printers and quell their qualms about investing in a hybrid system. It is indeed a revolutionary step by UTS. For those who are too concerned of data and want to invest in the system, UTS is talking with a few financiers for ZERO interest loans too. “Our cloud based Software as a Solution (SaaS) is fully secured but have the option to install the server at the customers’ premises too for those who are overly concerned,” says Sachin.

Going a little back, CountWONDER is a product owned by Mumbai based Pentaforce Printing Software (PPS) which has been in the printing industry for over three decades now and has a full suite of ERP for printers. Madan Singh, CTO of PPS says, “UTS will be selling CountWONDER in India and with Demo installation and conversions happening at a comfortable pace, we are planning to launch a CountWONDER based Scheduler for printers in India shortly which will be a game changer for printers in the country who wish to leverage on technology for growth and inclusive progress.”

Best of luck team UTS and PPS. Anyone interested may visit www.unicotechsolution.com for more information.